Hello, I’m Wataru Kashima, M1 student. I participated in Internship at University of Oulu. I was in Oulu for one month.

I belonged to the group of Prof. Janne in Department of Computer Science and Engineering. I worked on the implementation of light field rendering which is used for light field displays. My adviser was often next to my desk, so I could often receive valuable advises. However it was difficult for me to communicate with him in English. I asked him unclear parts many times, then I could understand. Probably I could improve my English skill. I often went to eat lunch with my adviser, and he told me many things in Finland. It was interesting. I appreciate it. 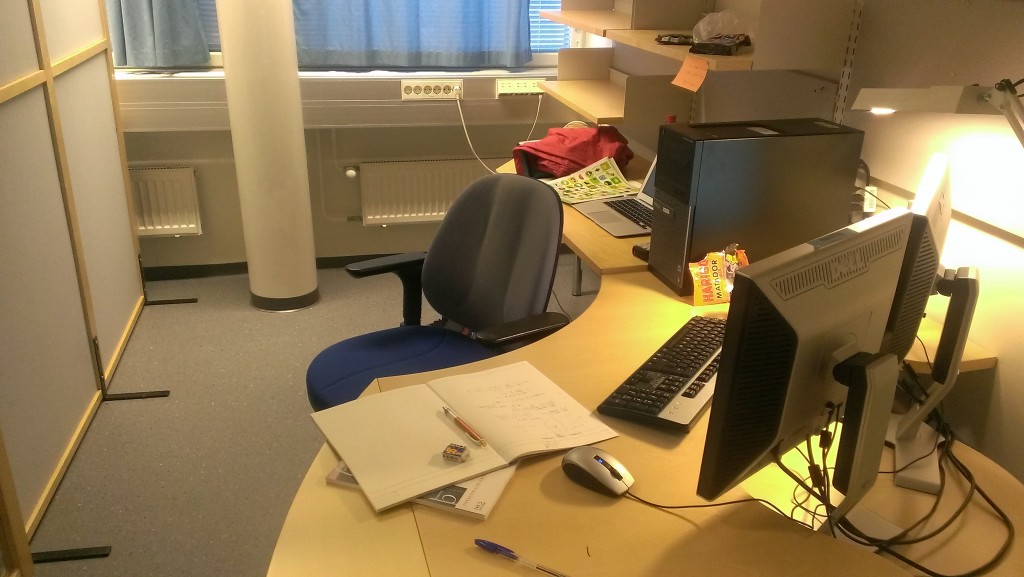 I could feel Finnish culture. I took part in Cafe Lingua which is a meeting for international and internationally-minded students at the University of Oulu. I communicated with many Finnish people. I told them Japanese culture, and I asked them their culture. Some things are interesting, the others are curious for me. I was glad to know them. And I participated in the sauna club. In this club, participants entered the sauna together. It’s simple!!  We drunk beer in the sauna. In the sauna, I got thirsty, so cold beer was good.

It was not easy to communicate in English, but I had great experiences. And I can feel different styles of everything. It was fresh and interesting. If I have a chance, I’d like to go there again. 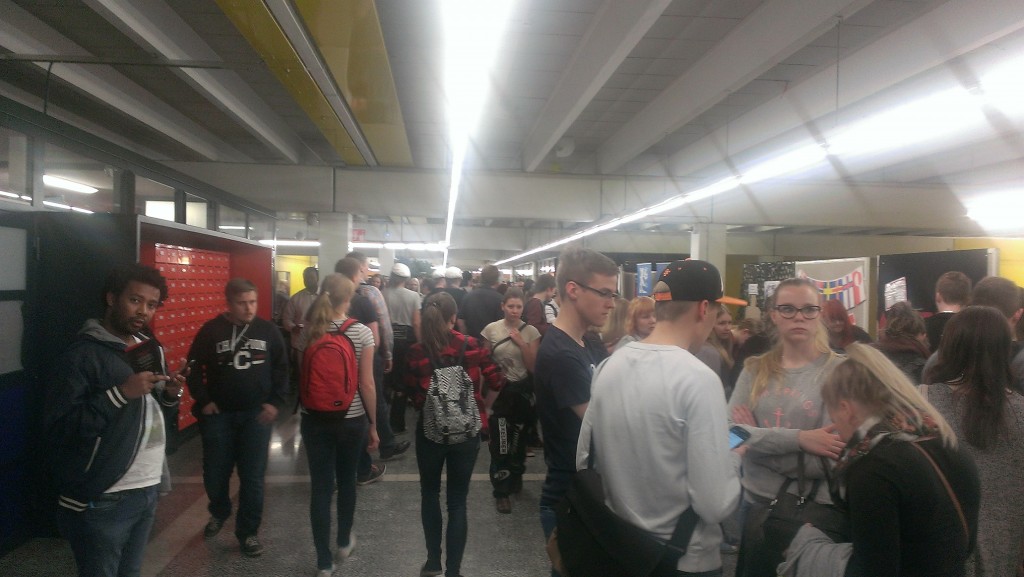 There were many people at lunchtime

This is Kazuki Sakai, a master course student.
I participated in SIG-MR at Otaru, Hokkaido.
MVE and SIG-CS were co-located with SIG-MR.
We discussed Argumented Reality, Virtual Reality, User Interface and so on.
Here are the details (SIG-MR).

Otaru, where the conference was held, is one of the most historic places in Hokkaido, and many gas lamps illuminate the city at night.But when I went there, the weather was so horrible that I couldn’t take a good photo. 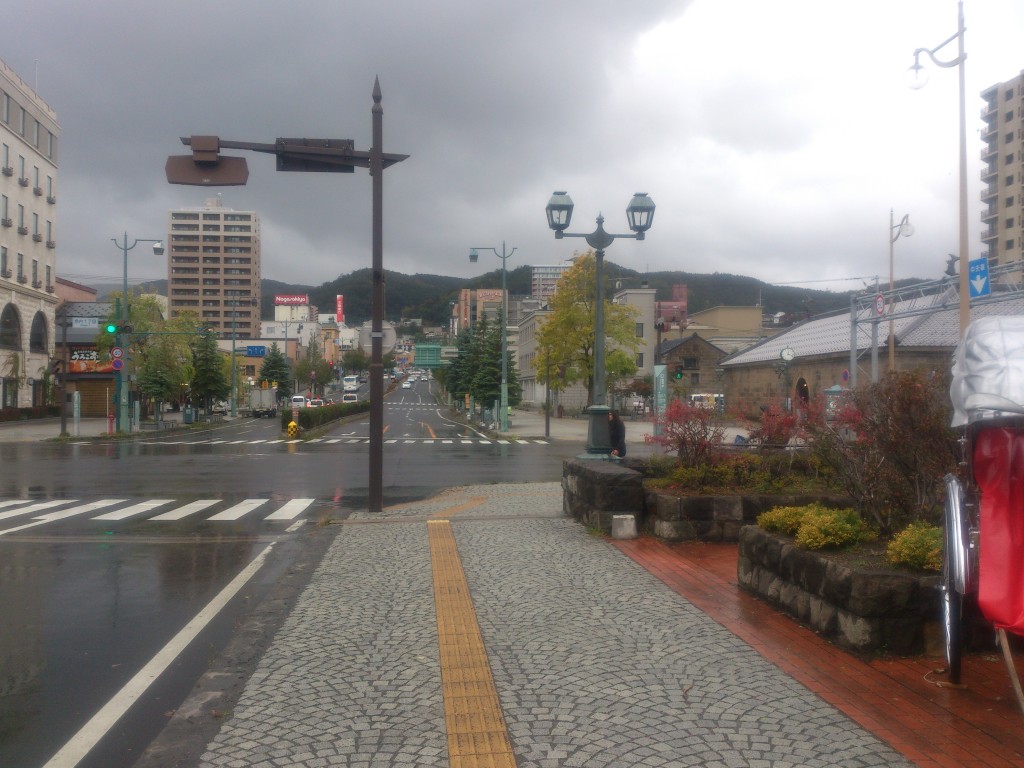 This is the conference hall(named Otaru-shi Kanko bussan plaza).
It looked like a warehouse. 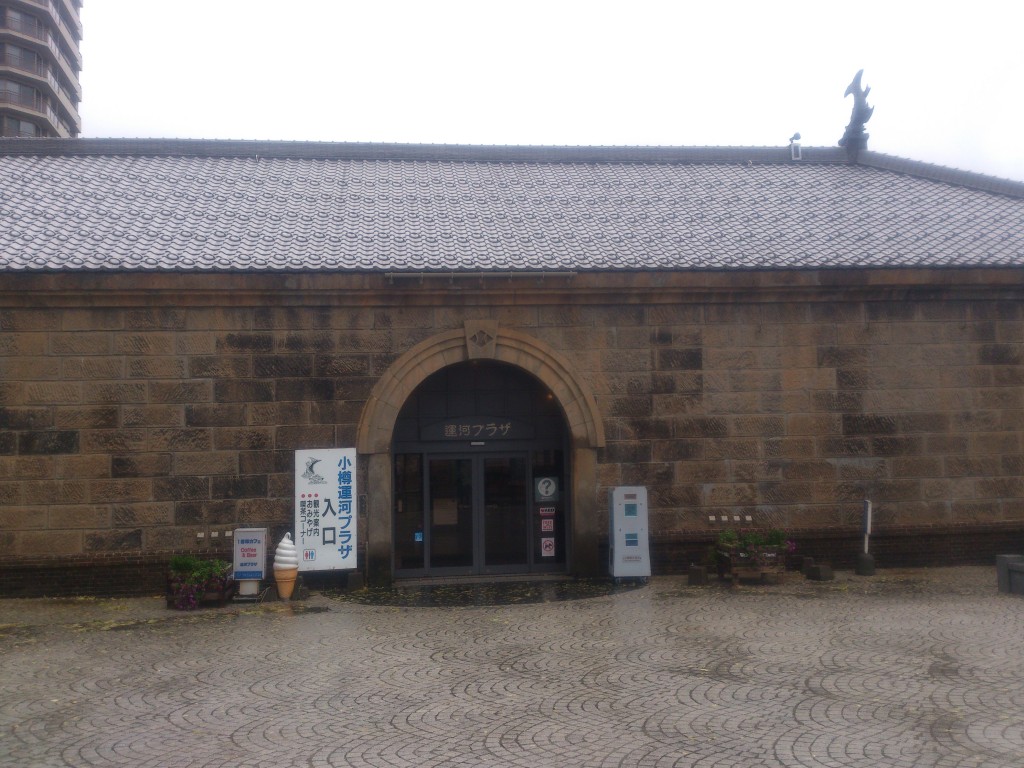 There were 24 sessions.
This was the first official reserach presentation for me, so I was nervous, but I had a good experience. Also, there were many researches which were not related to my research, e.g. visual ability extension system using wearable device, shooting support system to take more attractive food photos, and they looks interesting for me. And listening to other university/company researchers’ presentations inspired me.
If you have chance, please attend this conference. 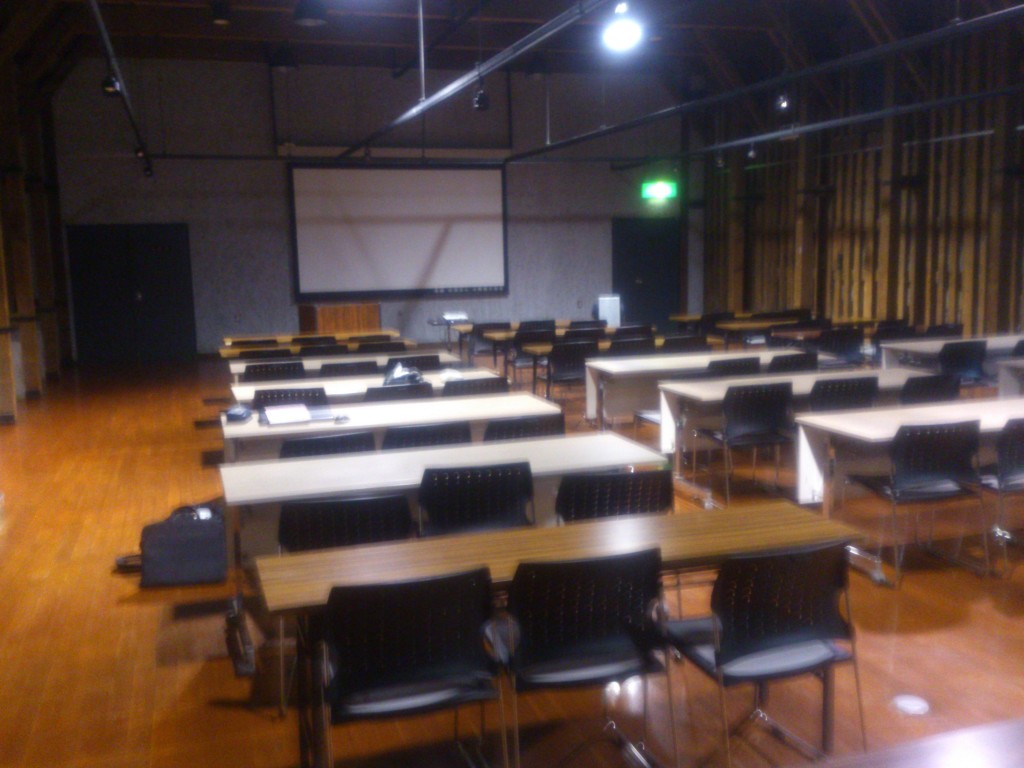 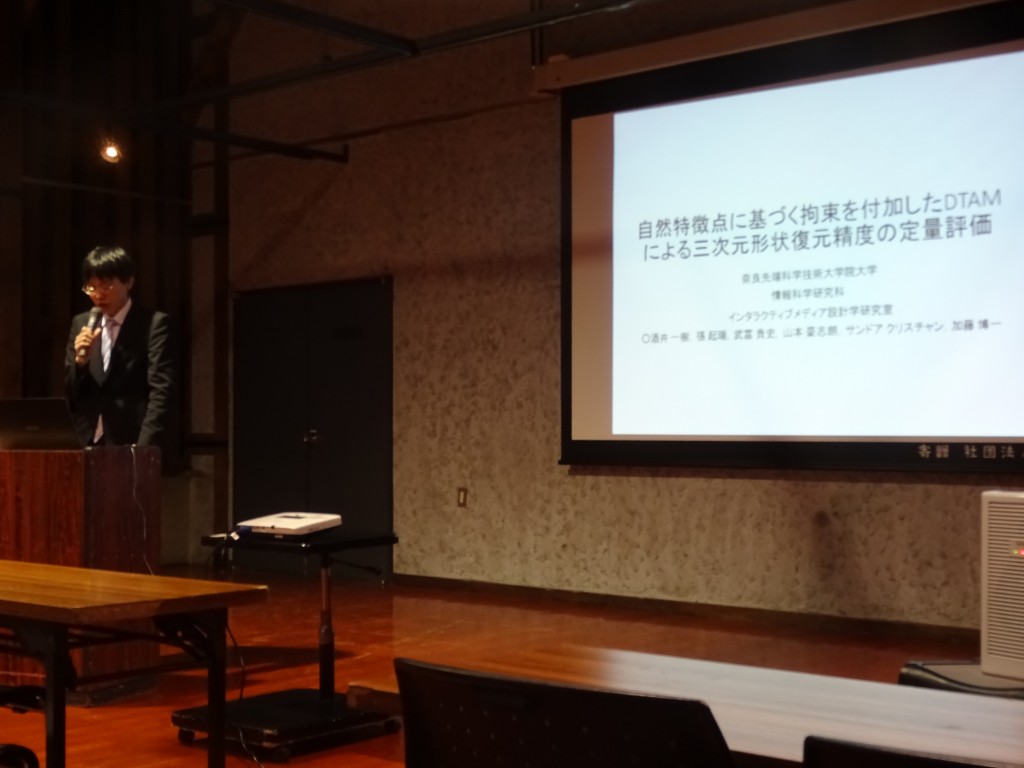 This is Jarkko Polvi, a PhD student. I participated to a two-week China-Japan student workshop at Hunan University, Changsha, China. The workshop consisted a small group project with other the Chinese students and the actual workshop called “6th China-Japan Student Workshop in Information Science.” We also did a weekend trip to some famous sightseeing spots near Changsha. 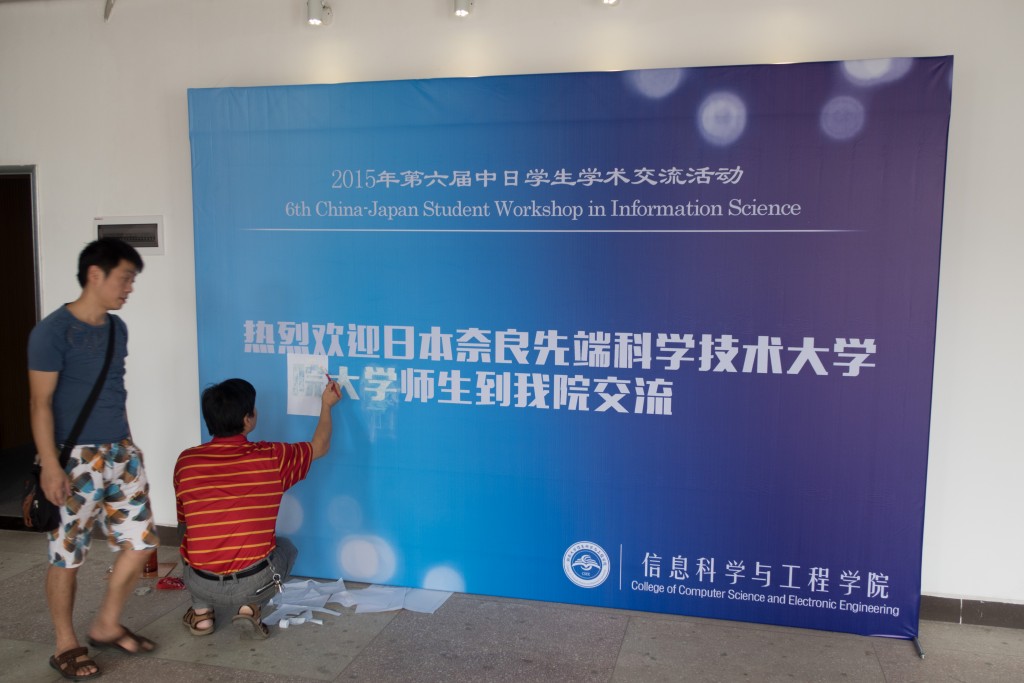 Me and Biro-kun where at the same project group with two Chinese students. Our task was to use Kinect to recognize actions based on the skeletal data. I had zero previous experience with Kinect and the first thing I learned was that if you have a Mac… well, be prepared and install Windows to it beforehand, might save you a lot of time. I learned how to setup the environment for Kinect and what I found the most interesting was to figure out how do the joints in a human body move and where each joint is related to others while we perform actions. At the end of the two-week workshop, me and Biro-kun presented our group work. We made a simple fitness app that instructs you to perform actions like punching or lifthing hands. Professor Shying Li was very happy with our results. 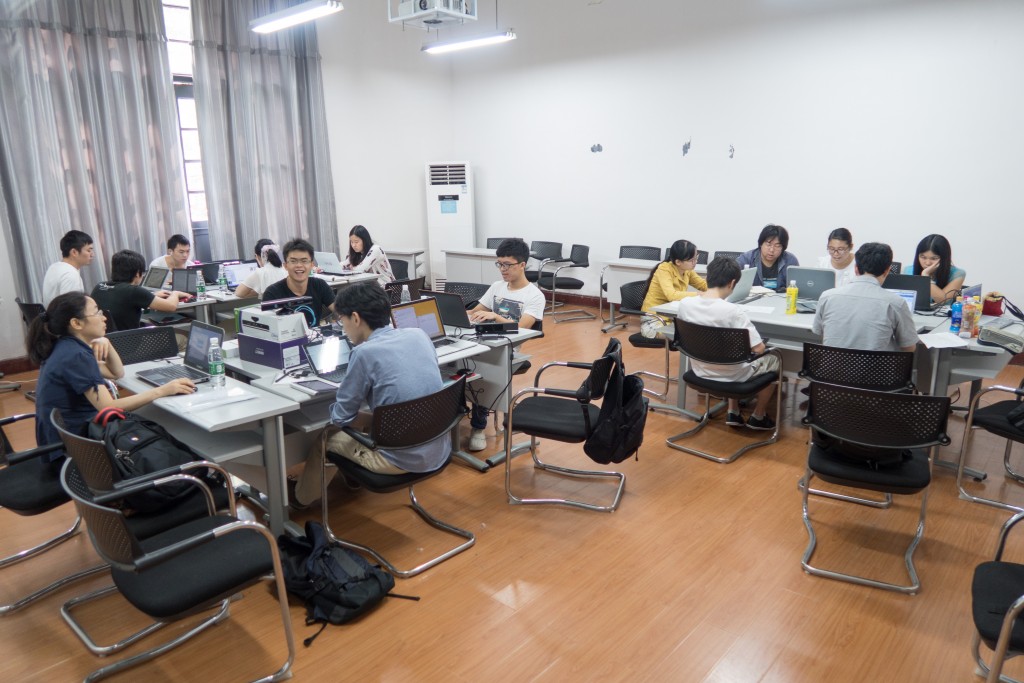 The actual workshop was titled vaguely “–Workshop in Information Science” so there was a huuuge variety of different topics. Some where about AR/HCI, but many where related to physics or chemistry, which reminded me physics classes in high school. I noticed that many research topics presented by the Chinese students/researchers where very mathematical. The program chair also commented at one point that Chinese hardly ever do HCI research or field studies. 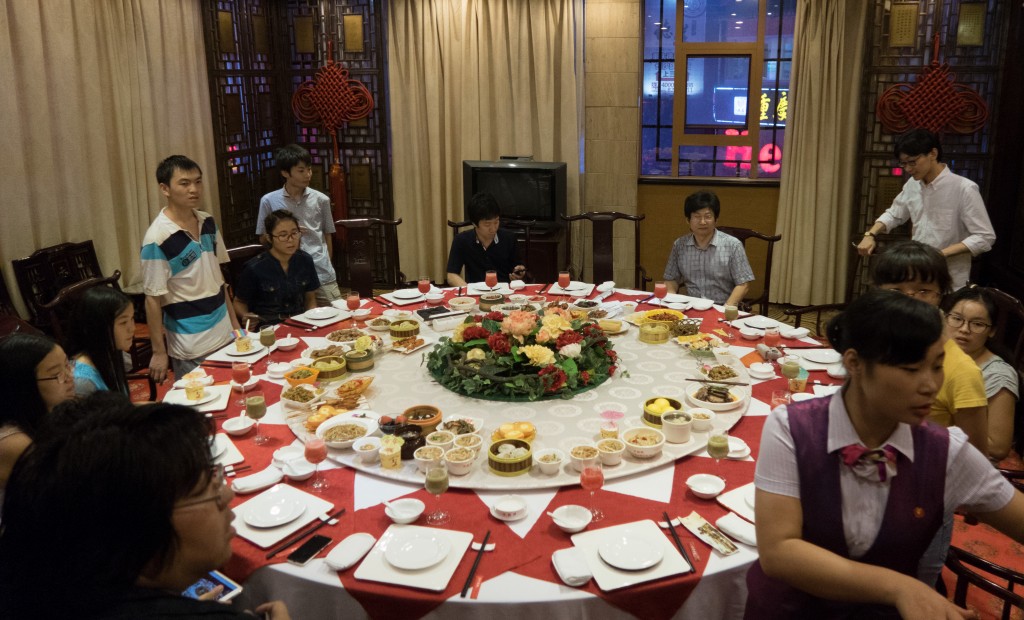 The campus of Hunan University was very large and it was difficult to distinguish from where does it actually begin. For example, it had a small shopping street with various shops and restaurants. September was the beginning of the school year and every freshman had 2-3 week army-style bootcamp period. During this period you could see a lot of students (guys and girls) dressed up in army uniforms and learning how to march etc. I was told that the main reason is to learn discipline and the exercises looked very similar to what I did in the army back in Finland.

The lunch breaks during the weekdays were very long, around 3 hours. Prof. Li told me that this is because students need to go home to eat and take a nap. Often you could see a lot of student sleeping in the class rooms during the lunch breaks. We also did that, many of us went back to hotel to sleep during the breaks. The work days ended at 5-6pm and then we went to eat lunch. This was very early.. for Japanese I mean, for me it felt completely normal. The Chinese students very were helpful and what I noticed about Chinese in general is that they seemed to talk very casually with strangers in shops or other public places.

The food was really spicy. I mean almost everything. You try some soup, spicy. You want eat some salad, you burn tongue. The food itself is actually really good, especially the mild ones that we ate, but for some reason people at Hunan like spicy food a lot. 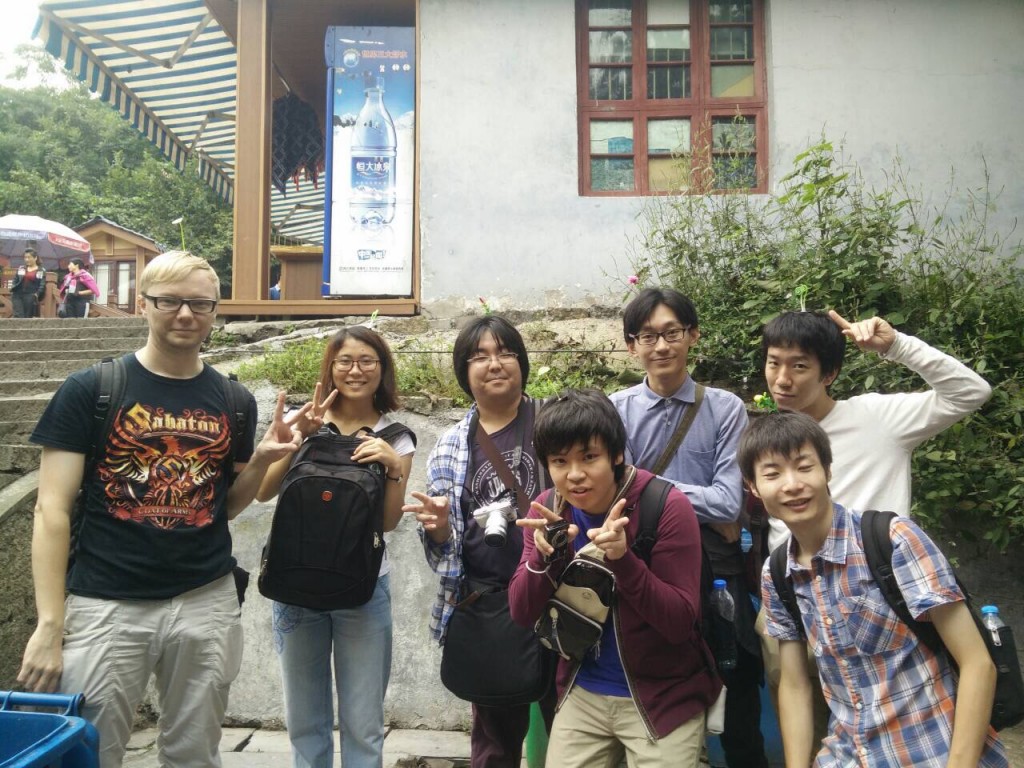 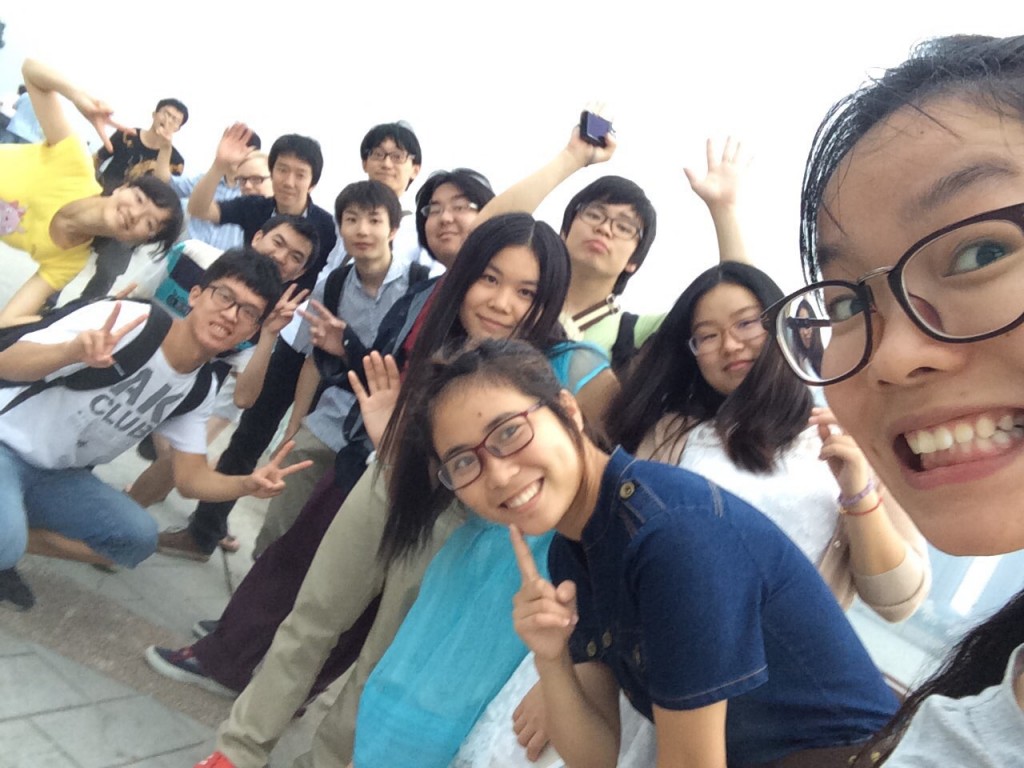 Overall, I highly recommend going to this kind of internship. Even though it is only two weeks, you get to experience soo many things small and big things that are different compared to Japan (and to Finland). Furthermore, I was told that in China girls are getting more and more interested in IT and that at Hunan Uni. the ratio is almost 50/50. This isn’t hard to believe, because in our group projects there were more Chinese girls than Chinese guys. This should already give NAIST students enough motivation to participate to this internship.

Hello, I’m Ryo Akiyama, M1 student. I finished my internship at University of Oulu on 13th September. I have already written about my internship days as an in interim report, so this time, I will write about the second half of my days in Oulu as a final report.

First, The Air Guitar World Championship was held during my stay. I had never seen air guitar before, so I was really interested in it. Also there were two Japanese participants in world championship, and one of them was the champion of 2014. Unfortunately, it was rainy and cold, and it was held in outside at night. Therefore, it was little bit difficult to watch all. However, I watched all programs in the competition. It was fun to watch, but I couldn’t understand criteria of evaluation… 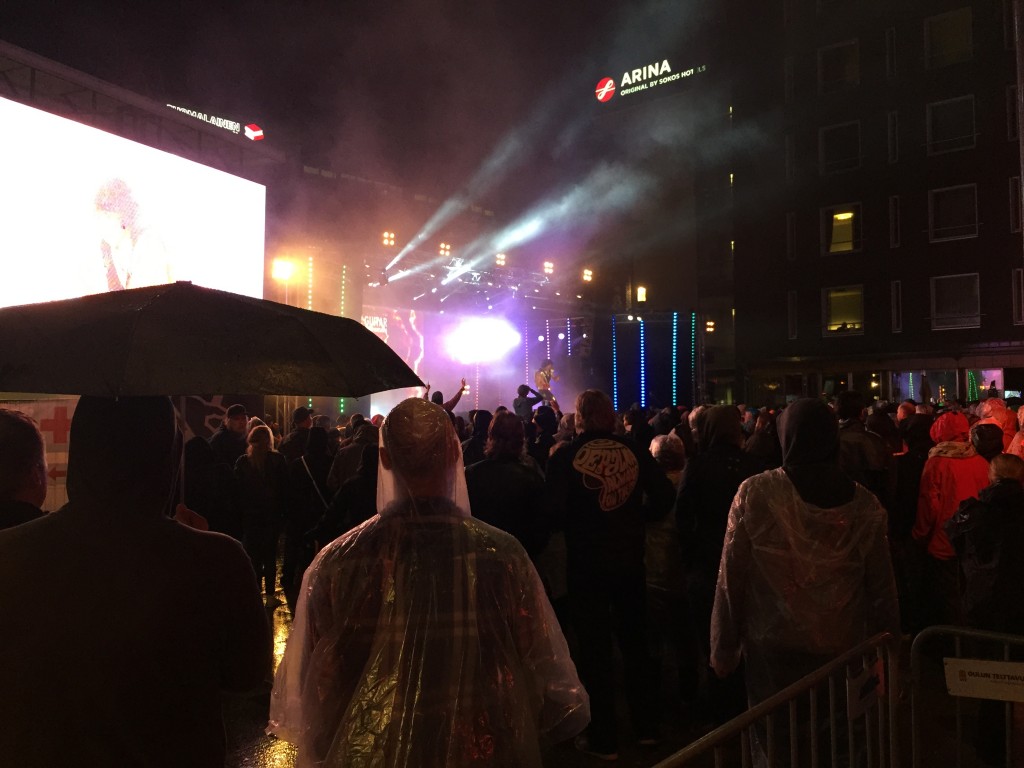 Second, I will write about my days in university. As I already wrote in the interim report, my task in Prof. Pulli’s lab is making animation movie to illustrate the Smart Glasses Project. I finally finished making it, and I made presentation with it. I worked with lab members, and I learned about the motivation or system outline with talking with them. Working with them was difficult for me, because communication is in English of course. But it was great experience I think. I wish I will go to Finland again someday. 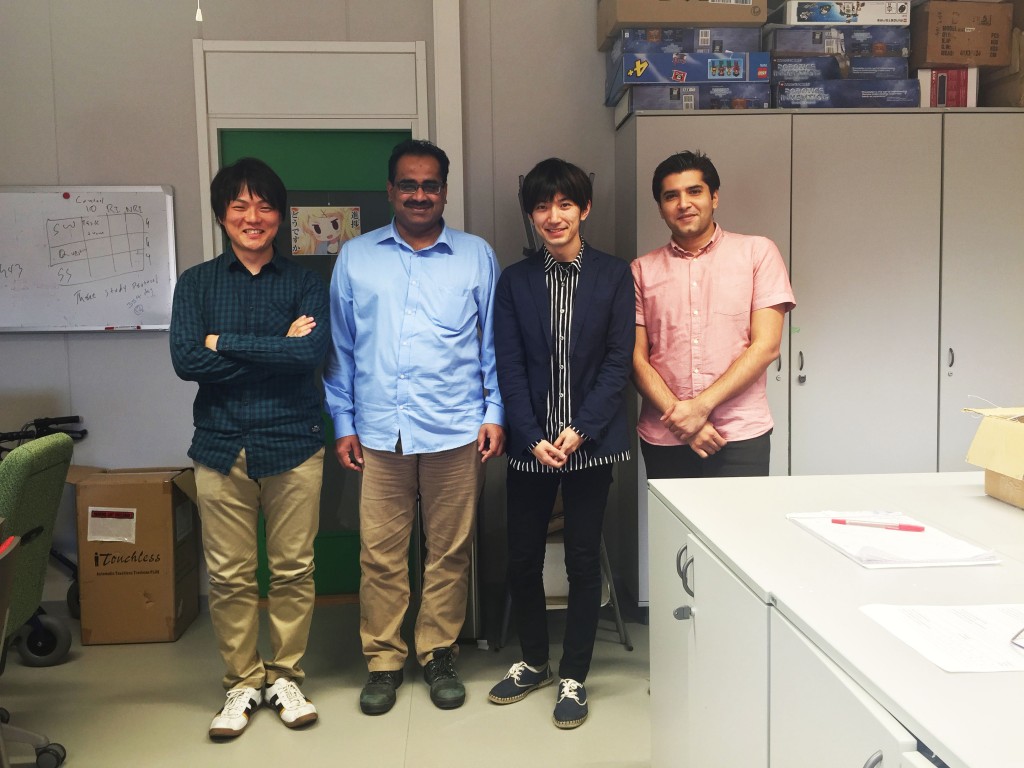 Hunan University have over 1000 years of history. We can sightseeing old buildings and historical sources.

I did workshop with Hunan University students. In this workshop, we were grouped into three and our group make a program that performs a bone tracking with kinect

In final day, We did demonstration of exercise applications. It can track a person, decide active users, do bone tracking and recognize of pause.

In this two weeks, I get friends with Hunan students. They took me local eateries and stalls in lunch break and dinner time. We were guided to the location where the Hunan students visit everyday, so I felt Chinese culture and atmosphere.

From Saturday to Monday during the period We traveled the world heritage, Zhangjiajie.

Hello, we are Kazuma Sawada and Yuki Yamamoto reporting on this year’s IMD study trip.

We went to Shirahama in Wakayama for three days intense studying.In there, we could learn many things and enjoying a brake.

Shirahama is a very nice resort in Kansai, directly in front of the ocean. In our stay, it were nice days, so we could view beautiful scene from presentation venue which is on 4th floor in the hotel. 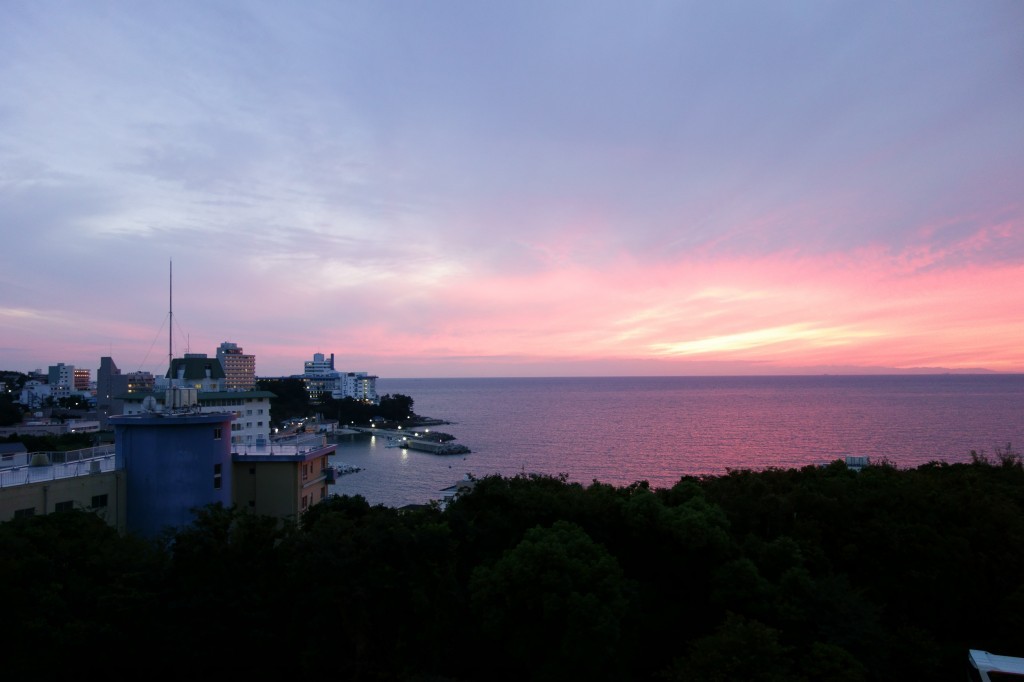 The professors and the students graded the presentations on both style and content, and prizes were awarded to the best presenters. 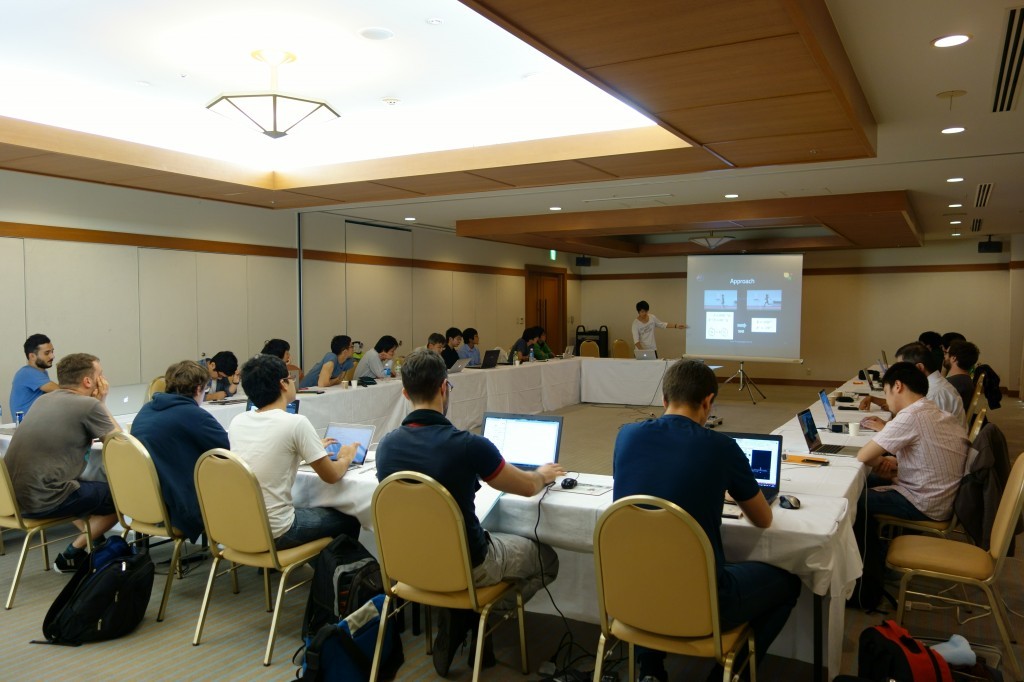 This trip enabled us to touch many studies and presentations.

Of course, not only did we study a lot, we also had a lot of fun there.We enjoyed delicious seafood and beautiful Shirahama beach.We think everyone in this lab could heal the usual research tiredness. 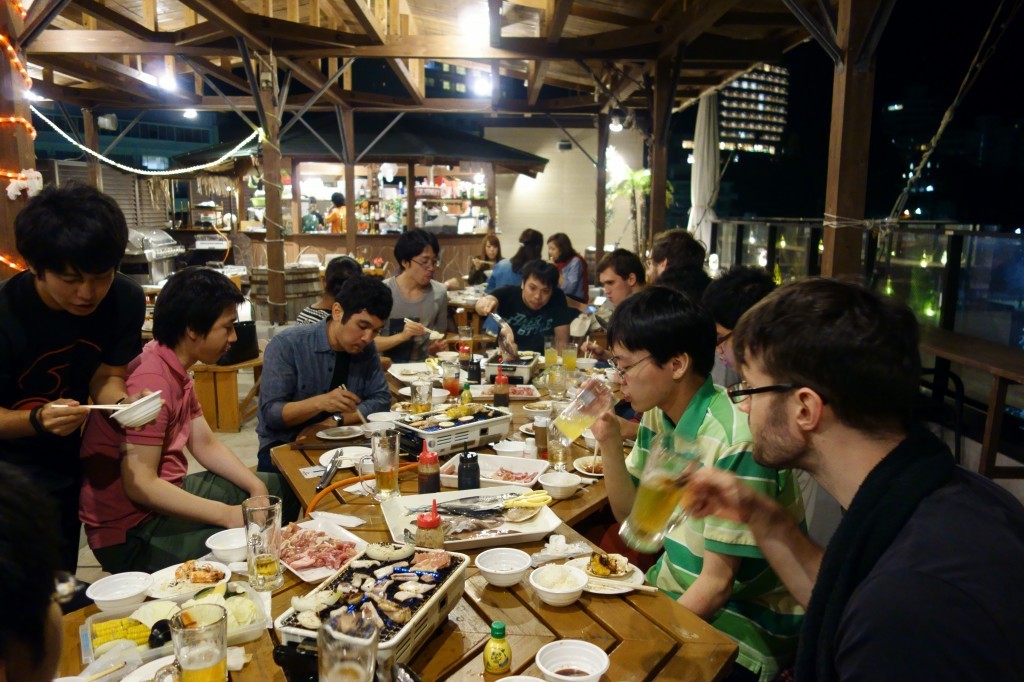