In late May – Early June, Several of my colleagues and I travelled far to the land of Munich, Germany to participate in the NARVIS-NAIST Bilateral Workshop on Medical Augmented Reality.

The main purpose of this workshop was to nurture collaborations between the Interactive Media Design lab at NAIST and the NARVIS Medical Augmented Reality lab. 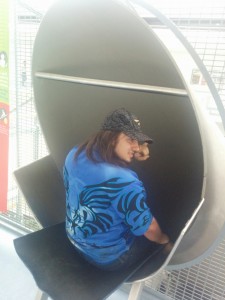 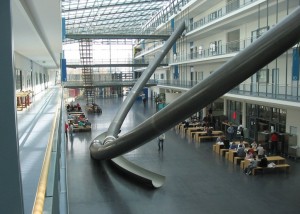 The first morning was the first day of presentations, but I arrived earlier to explore TU Munich. The first sight I came across was a massive 4 story slide, making a trip from the 4th floor to the ground floor exciting and fun! (And it certainly was fun to slide in :D).

After that we got a little more serious, and started the presentations, which lasted the first two days.

We heard some amazing research being done by the guys in TU Munich (Which spoke about a range of Medical Applications in Computer Science), as well as some research from our university (Which was more heavy on Augmented Reality), I myself presented my research on EyeAR.

Afterwards we got to enjoy some of the local food (and beer) in Germany. Beginning with a huge leg of 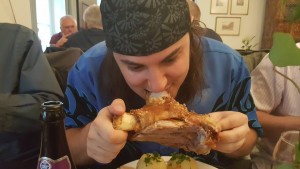 sadly however, I couldn’t finish the huge leg of duck! 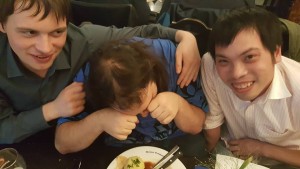 Waaah, I couldnt finish it all :c

Before heading home, I came across an…. interesting and enticing site! 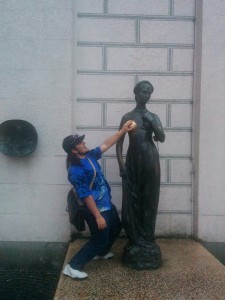 This statues golden breast is said to give good luck… I SWEAR!

In the second day, we heard an interesting talk about Medical Augmented Reality by Professor Nassir! whose lab we visited afterwards. The first place to visit was in the FAR lab, where we saw some cool augmented tabletop Tower Defense games (unfortunately I do not have photos of these). The second place we visited was the Computer Vision and Machine Learning lab! It was here we saw how machine learning can be used to recognize objects in a scene in real-time! (Again, no pictures. sorry!).

Later that evening there was a wine tasting! 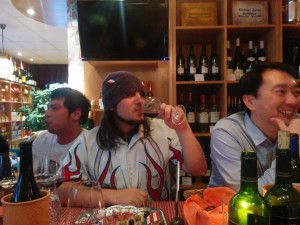 *sip sip* ah, nothing like a little french wine to end the day.

The third day we took a tour around some of the other TU Munich campuses, and saw many awesome demos! we first visited the NARVIS lab, where we saw a cool combination of Haptics and Augmented Reality for Medical Procedures! 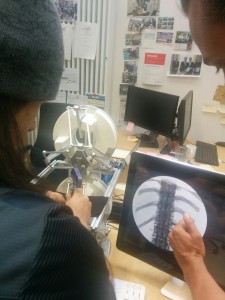 Ok…. carefully insert the pin into the spine… no worries…. This device simulates a live operation on the spines bones. 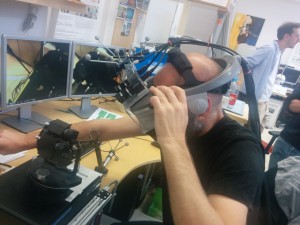 We can not see it for ourselves, but Ulrich here is plotting a course for a brain surgeon to cut into the brain avoiding critical parts

After which we had a small lunch break……… 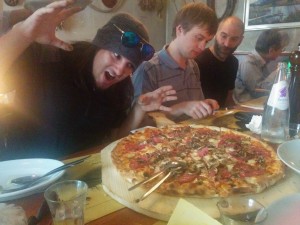 There is only one who can handle this much pizza. GIMME!

We then took a visit to a Simulation Center for Emergency Medicine, where scenarios are planned and then performed with everything hooked up to a central control room. This allowed the director running the simulation to create interesting scenarios for the medical team to encounter.

(For example, there was a dummy hooked up to some external sensors, which allowed the dummy to become warm/cold, and the monitors hooked up to the dummy produced synthesized heart readings). 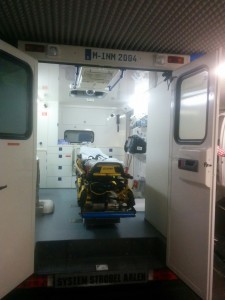 The bed actually is hooked up with various network devices to simulate things like a broken wheel!

The final day brought us to the IFL lab that’s inside the medical hospital! A lot of weird and exciting demonstrations were shown to us! these were mainly focused on Nuclear and Robotics in medicine! 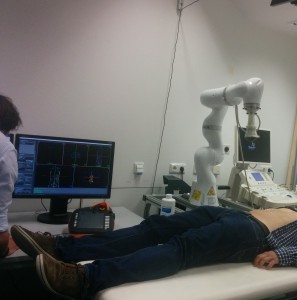 The robot performs this sonogram all by itself! 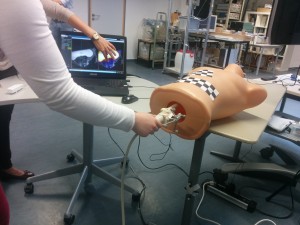 YEOUCH! the poor dummy is used as part of an AR rectal camera simulation for training!

The host family I stayed with enjoyed the evening with a little hand-made Japanese Soy Ramen! (Made by yours truly :P) 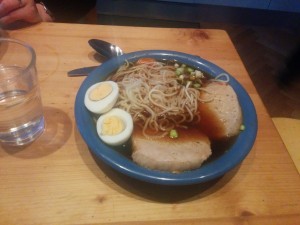 I really enjoyed Germany, I wish I could have stayed alot longer. 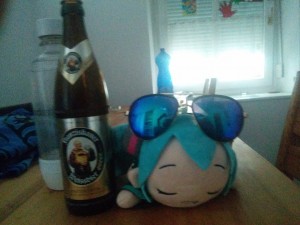