It is getting warm and feels like spring in the air.
How are you and your staff doing.

From our lab, Assistant Professor, Taketomi and M1 students, Kojima, Sakai, Seto, Hayata attended in order to support them. In this time, the theme of their experience was the programming with ARToolKit and projection mapping. Each one is familiar in our lab.

In ARToolKit group, at first, we gave participants basic program that it shows Tachikoma on a AR marker.Then, they started to work on some challenges.There were two challenges, one was to lock a position of Tachikoma in the screen while he/she is clicking a left-mouse-button.
Another one is to retain a positional relation between Tachikoma and the marker when he/she released the mouse button, even if the marker moves.
Before these challenges, they implemented some codes to increase one more AR marker that camera can detect as developing an understanding of ARToolKit. 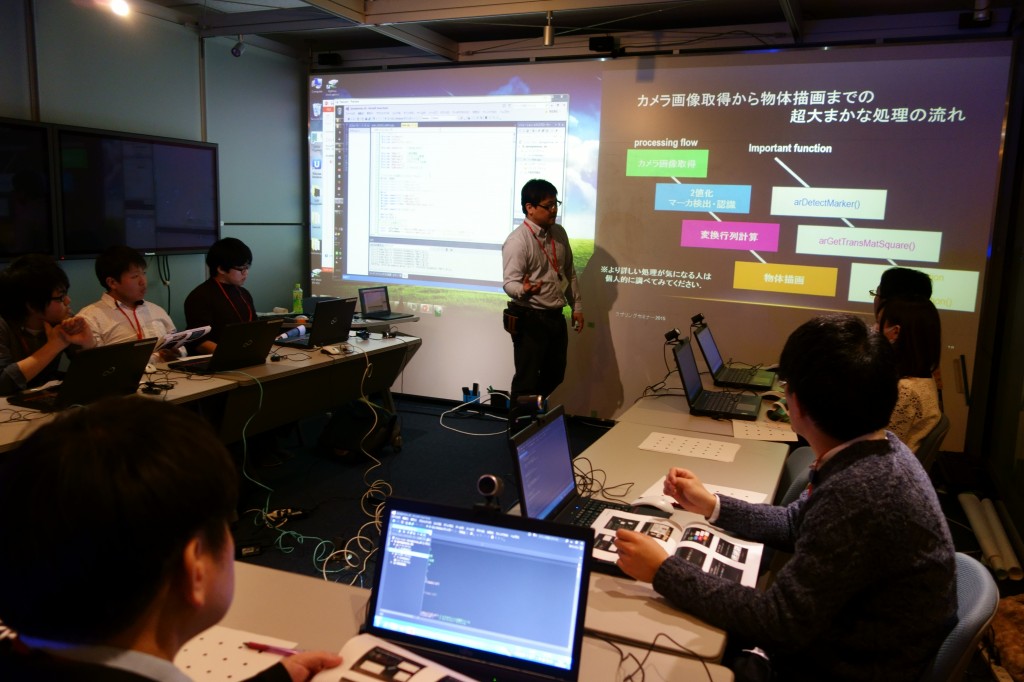 After the start, some participants were surprised by moving Tachikoma, but they concentrated upon challenges a few minutes later. ARToolKit has many functions, it’s easy to make AR applications for us by using ARToolKit. Therefore, people who have not used C++ looked as if they didn’t feel difficulty to make code while searching on the internet.
On the other hand, since we should consider coordinate transformation when, for example, we try to calculate a distance of two markers, they had a hard with how to use transformation matrix in which order. 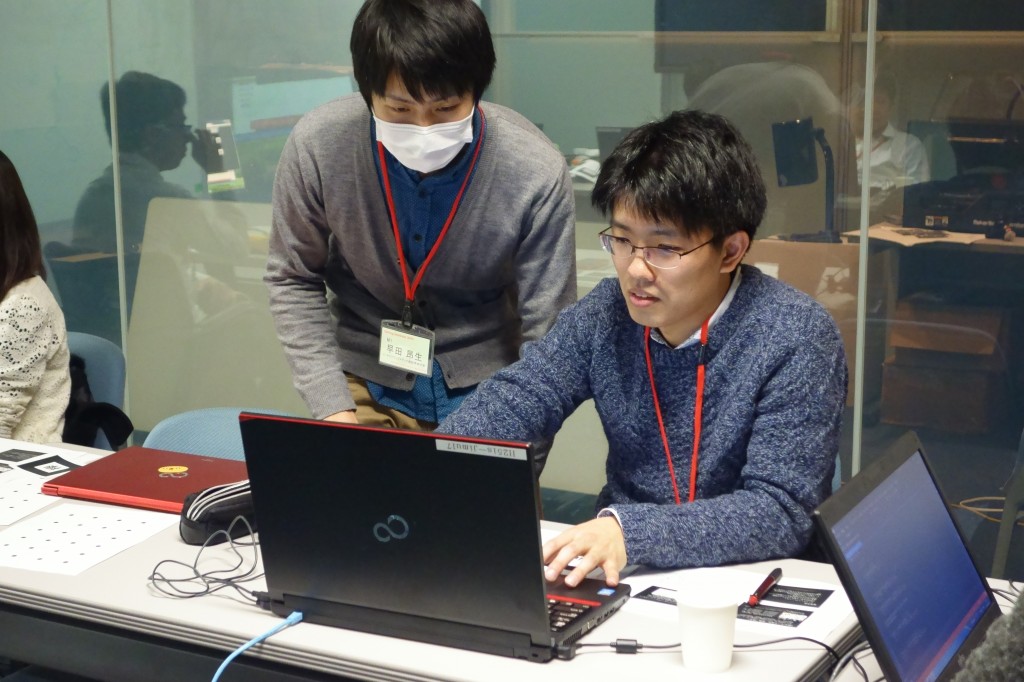 However, almost of all participants were over one hour earlier than end expected time by to search on the internet and to ask us. Until the end, they asked us a life in our lab, question about going on to NAIST, and so on. 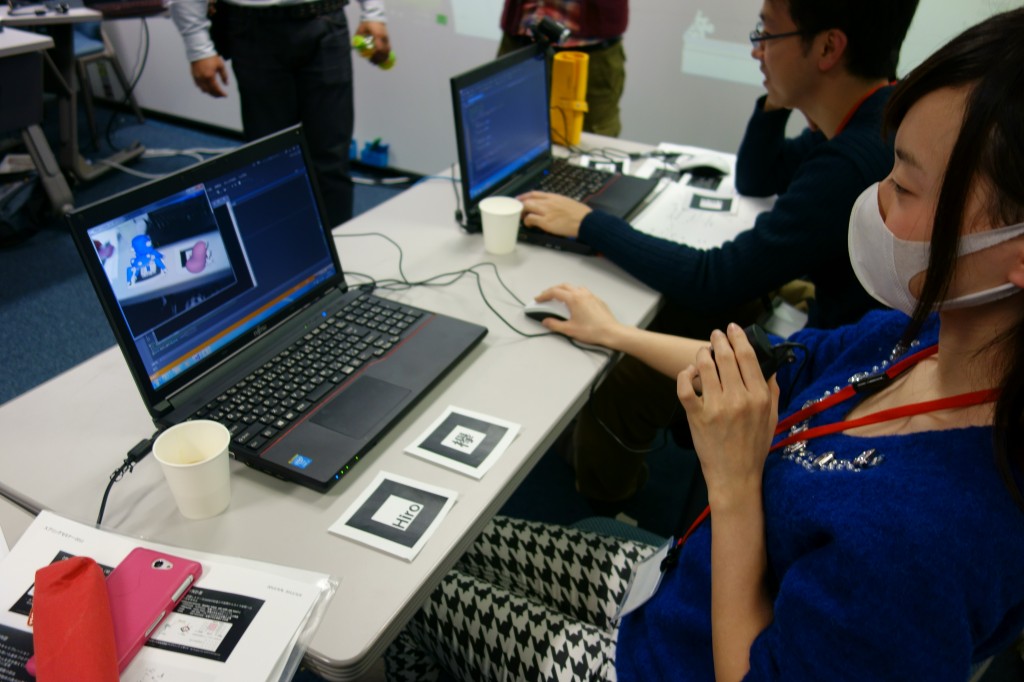 To make this system, the first challenge was to calculate the coordinate of pen tip on the marker coordinate system by using the pen that marker was stuck. They did the task well because that was easy setting of parameter. Second challenge was to make the calculation part of projector parameter for coordinate transformation from real world to projector coordinate system.This task was a little bit difficult to make program from the start. So they calculated the determinant of matrix by using the paper and pencil at first. Then the task could be easy and they figured out. 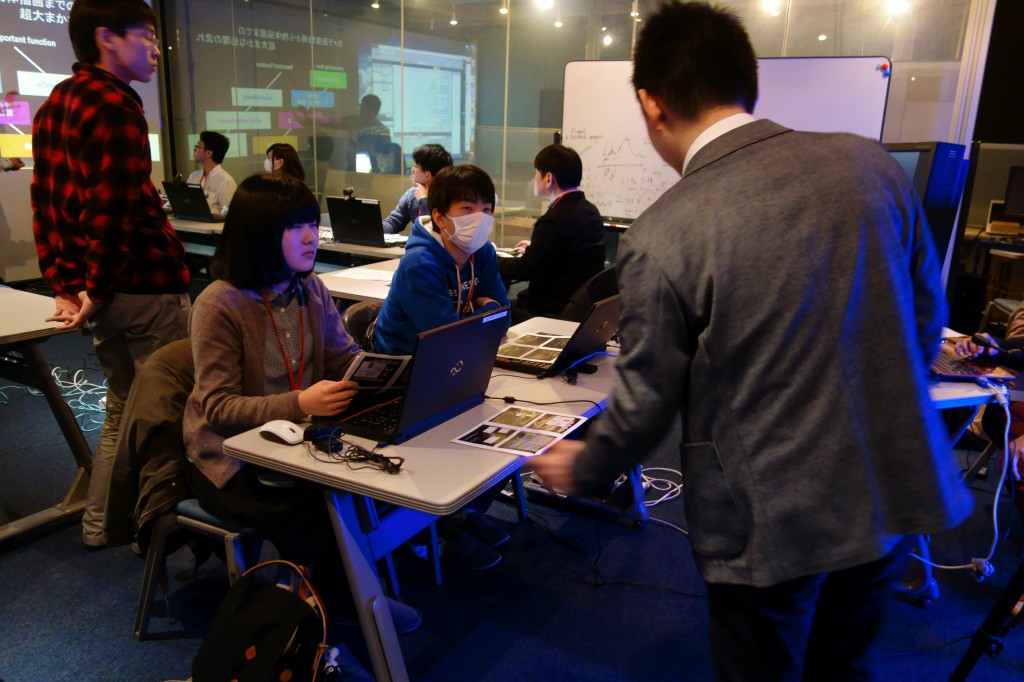 In additional task, they tried to make the collision detection program of pen tip and cube object. After that, they tried to make projection part.
That was a little bit difficult to them, the beginner of C++. So they used sample program as a reference to study the procedure.
Finally, they understood the procedure and tried projection mapping to the box. The task was difficult to the students who have no knowledge of this programing language but this should be a great experience for them. 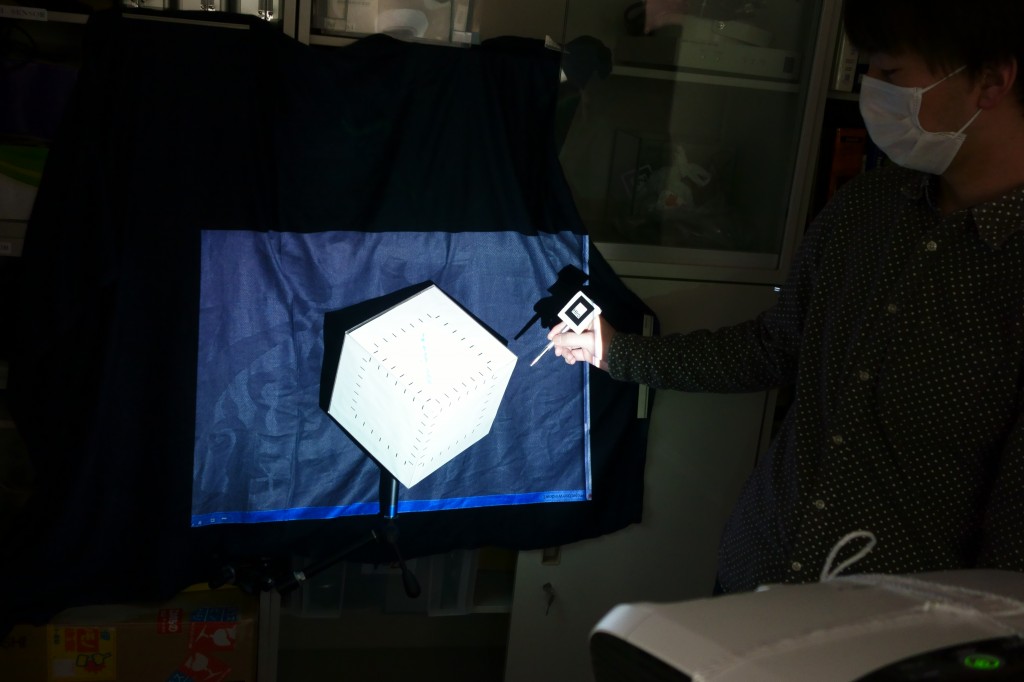 Everyone finished the exercises of two days.
In spite of the hard exercise, they had a lot of time on their hand, and they were talking. It is usual case in our lab to talk with foreigner. 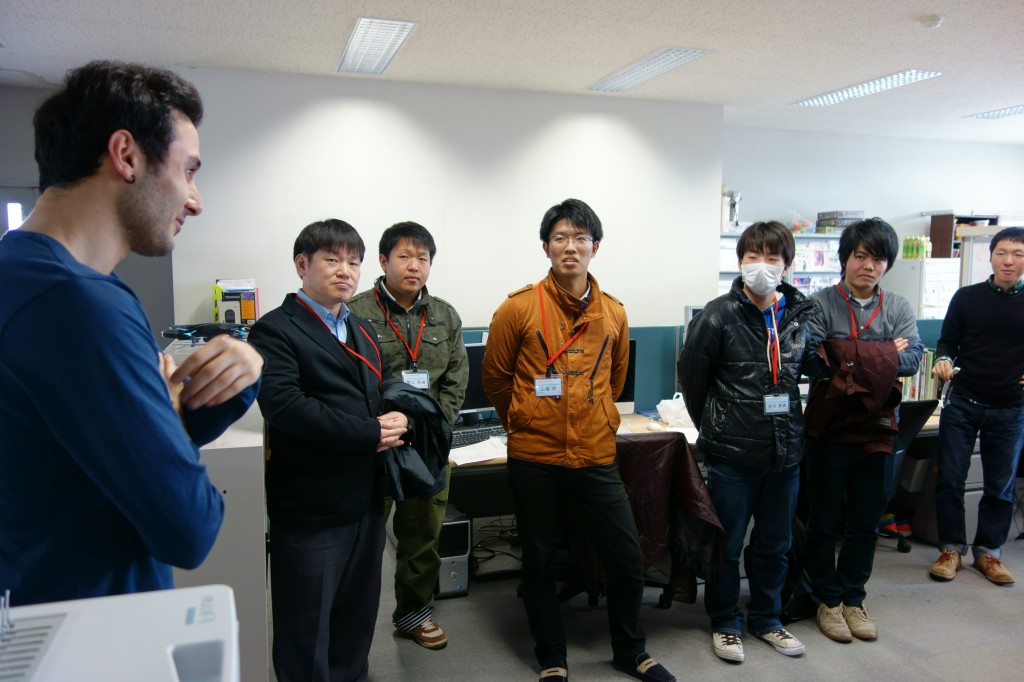 It had a good time to talk about our lab and the knowledge of examination.
I’m looking forward to seeing them as the IMD lab member in the future.